The dirham of Arab Emirates

The United Arab Emirates dirham is the legal tender of the country and was introduced on 19th May 1973, replacing the Qatar riyal. The dirham is subdivided intro 100 fils.

The history of the currency dates back to 19th May 1973, when it replaced the Qatar riyal. The Qatar riyal had circulated in all the Emirates except Abu Dabi since 1966. During the transition from the rupee to the Qatar riyal, both Qatar and Dubai used the latter currency.

The year the dirham was put into circulation, the following denominations of coins were minted: 1, 5, 10, 25, 50 fils and 1 dirham. The 1, 5 and 10 fils coins were produced in bronze and the rest of them in cupronickel. The size and composition of the fils coins were the same as that of the corresponding Qatar riyal. In 1995 the size of 1, 5 and 10 fils and also of 1 dirham coins was reduced. The new 1 dirham coin had exactly the same diameter as the old 50 fils coin. The new 50 fils coin was also reduced in size and given the heptagonal shape.

On 28th January 1978, the dirham was pegged to the International Monetary Fund special drawing rights, but in practice it is set to US dollar.

Banknotes and coins of the United Arab Emirates dirham in use

The authority in charge of minting coins and issuing banknotes is the Central Bank of the United Arab Emirates. 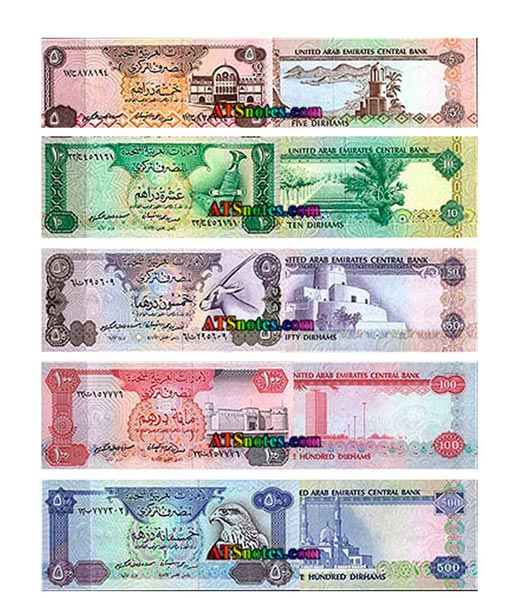